Be better than that! Read on for my most commonly spotted errors when running Facebook ads and the right way to get amazing results.

Not Checking Comments Of Dark Posts

Without a doubt, this is the one mistake that I see many pages making every day.

By default, for some crazy reason, Facebook doesn’t send you the same type of notifications when creating a promoted post advertisement. So, by default, you’ll probably be totally unaware when your ad is collecting comments, shares and likes unless you manually check it out.

To solve this issue, open the preview ad box in Facebook ad’s campaign manager, then click the following link to make sure you’ve got the permalink of the post.

Then, it’s as simple as monitoring that link every day or so to make sure you’re responding to questions, comments or positive feedback. A week doesn’t go by where I don’t see a large brand running a Facebook ad with dozens of negative comments under the post. This is a huge mistake, as you’re spending advertising dollars for your brand-haters to leave negative social proof with their friends and your ad targets.

Another big mistake on any moderately sized campaign is not testing different images. More so than copy itself, testing images on Facebook ads is the most important aspect that will impact your click through rate.

Several smart strategies include adding a boarder to your images, changing up the colors and testing different themes.

Just with a few tweaks with your post images, you’ll likely find one that ends up performing the best — leading to a lower cost per click and better results. Don’t shy away from creating 3-5 ads for every ad set you’re running — you’ll start to find out what works the best for your particular audience, helping your ads long into the future.

While subtle, I’ve seen that adding Facebook’s CTA (call to action) buttons can help get more clicks for less money on your ads.

Towards the end of the ad-creation process, you won’t want to miss out on the adding these buttons. Of course, sometimes you’re not offering up a download or even booking anything, you’ll have to choose a different button.

This is the most common tracking mistake I see. Similar to other Google Analytics tracking mistakes, it’s easy to forget little details. Simply, when running Facebook ads, it’s best practice to include UTM tracking codes so you can accurately measure the traffic coming into your website.

I usually tag URLs in the following format:

Obviously, I go and place my campaign name into the last section for accurate tracking. This will allow for you to track the users who go on your website from Facebook and see how many pages they view, if they convert or not and other metrics like time on site.

It’s pretty simple and straightforward to tag Facebook URLs – simply add in the parameters above to the end of your website destination URL. 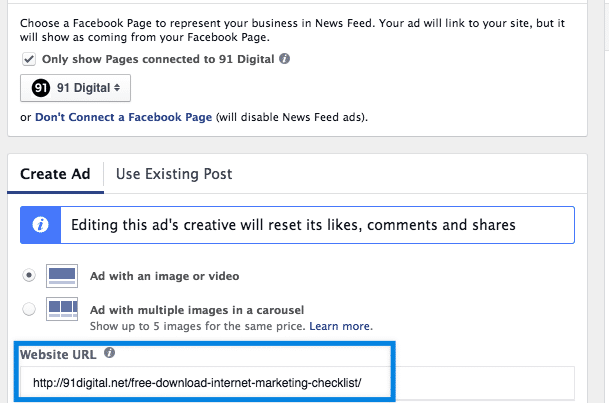 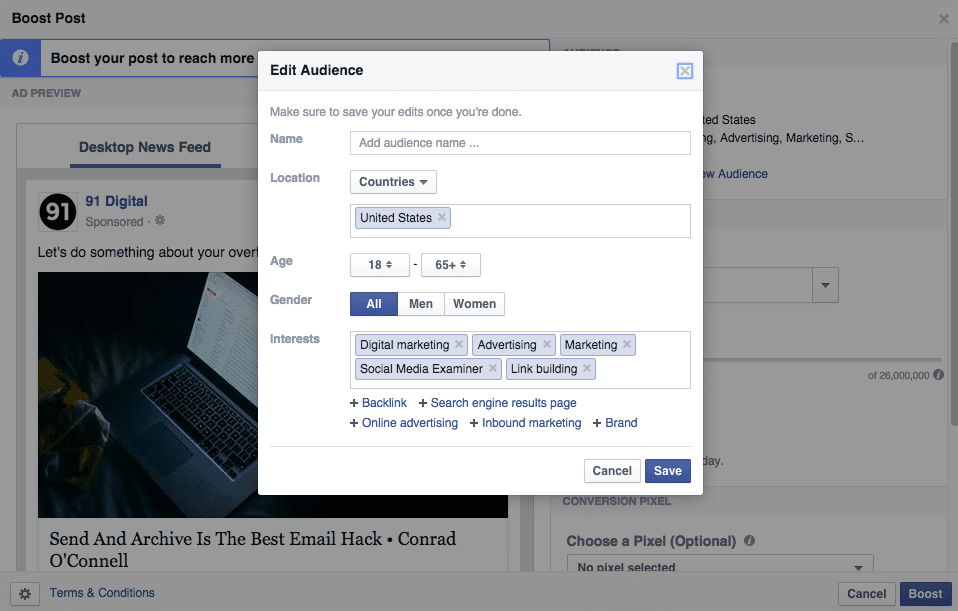 Back in the day, it was common that using the Boost Post function was pretty much always a bad idea. Now, using Boost Post isn’t as poor an option as utilizing the Power Editor options.

While the targeting options in Power Editor are much more robust, with smaller budgets (both time and money), it’s acceptable to use the Boost Post function to get more paid reach.

The options for boosting a boost still have targeting choices galore and a simple interface.